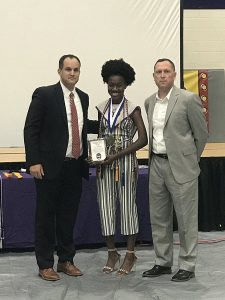 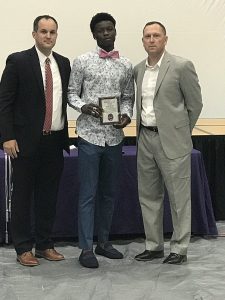 Seniors Iesha Whittaker and Senika McKie have earned the Cornelius Harvin Memorial Award.  This is the highest honor that any Ridge View student-athlete can earn.

According to one of Iesha Whittaker’s nominations:

She is a driven young lady of high character whom it has been my joy to work with the last 3, almost 4 years.  Even though our season has been over for months and she is nearing graduation she is still supporting and leading us by helping us forge ahead into a new season, sadly without her.

According to one of Senika McKie’s nominations:

He doesn’t just excel on the court, field, and track – he puts forth effort in the classroom and in his community too.  Most importantly, he is a leader among his peers. He is likable, caring, and he is respected by both his teammates, his teachers, and his coaches. It has been my privilege to coach and teach him for the past three years.  He is the kind of student-athlete that I love to coach. My life is better by knowing him.

Cornelius Harvin graduated from Ridge View High School in 2006 as one of the most decorated runners in school history.  During his final athletic season, Cornelius:

Behind these performances the Cross Country team finished second at the state meet and the track team won the last of their THREE CONSECUTIVE STATE CHAMPIONSHIPS.

In addition to these athletic accomplishments, Cornelius also distinguished himself as a first-class student-athlete and teammate.

His former coach, Jeff Buys, had this to say about Cornelius:
“Cornelius was one of the all-time greatest athletes I have ever worked with.  He accomplished so much in his high school career, and I was so proud of him.  When I think about Cornelius, despite how talented he was, it is never the athletic accomplishments that I think about.  I think about his warm smile, his joking personality, his incredible work ethic, his self-belief, his commitment to his team, and just without a doubt one of the greatest people I have ever met.  He was such a positive thinker and person.  He was one of the most polite and well-mannered young men I have ever worked with.  I treasured every moment that I had with him as his coach.  I know my life is better for having known him.  I know he must have been a wonderful husband and father to his family.  He was and always will be one of the all-time greatest.”

At the end of each school year, one Ridge View High School student-athlete that displays the qualities of selflessness, leadership, passion, joy and competitiveness will earn the Cornelius Harvin Memorial Award.  This award will be given annually to honor Cornelius and his contributions to Ridge View High School during and after his time here.  This award will be one of the highest a Blazer student-athlete can earn during his or her time here.

Click here to learn more about Cornelius and his legacy at Ridge View High School.

No Events This Week

Events are added by athletic staff.
View All Events